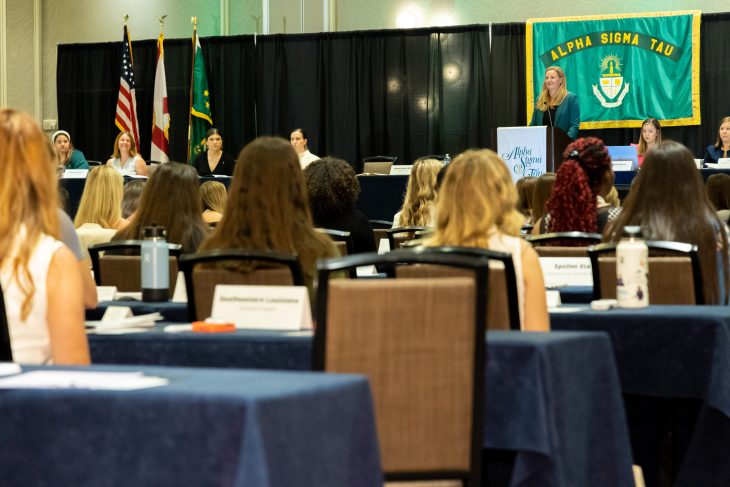 The ultimate purpose of Alpha Sigma Tau’s Convention is to meet with our Sisters to better the future of the Sorority by voting on pieces of legislation that will influence the future; electing a new National Council to guide the organization for the next two years; and recognizing those members who are contributing their share to the Sorority.

The second amendment was to strike all instances of the word “colony” in the Bylaws of Alpha Sigma Tau Sorority. As a result, the Sorority will no longer refer to chapters in the process of establishment who are working toward installation as colonies.

Each piece of legislation was presented to the membership before voting, via the Alpha Sigma Tau website, by email, live info sessions, and in the Convention program book. Each proposal was adopted with the two-thirds majority vote as required for changes to the Bylaws.

Convention delegates also elected the 2022-2024 National Council. The Nominations Committee Chair Megan Escobar (Gamma Tau 2008/Lebanon Valley) introduced the Nominations Committee Report and presented the slate of candidates for the 2022-2024 National Council. A voting guide of slated candidates was also provided to each member via the Alpha Sigma Tau website, by email, live info sessions, and in the Convention program book.

Stay tuned for more updates regarding Convention in the Summer 2022 issue of The Anchor.