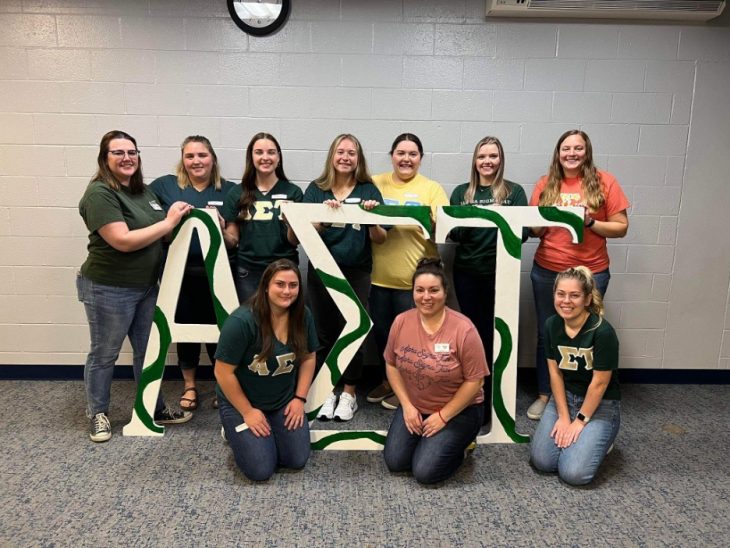 On November 14, the Gamma Tau Chapter at Lebanon Valley College (LVC) celebrated its 30th Anniversary! The chapter was founded in 1992 by a few Lebanon Valley students, including Markella Saliaris (Gamma Tau 1992/Lebanon Valley).

The founding Sisters felt they couldn’t connect with the existing sororities on LVC’s campus at the time. They started researching and found Alpha Sigma Tau. “There were no national sororities on campus at the time of our founding,” Markella said. “I remember seeing a sign posted about the possibility of starting a new sorority, and I thought I’d go learn more. We had a few sororities visit us, but none were the right fit until we had our visit from Alpha Sigma Tau and that was it! The idea of a national sorority appealed to me because I knew it wouldn’t just be us at LVC, but we would be everywhere.”

The founding Sisters liked Alpha Sigma Tau because it was both a national and social Sorority, unlike any other sororities at LVC. Markella and the other women couldn’t have imagined how starting a sorority would work out and if it was even going to make it to the following year. Markella shared how she has seen Gamma Tau change over time by attending Sorority events over the years.

“Technology has changed, LVC facilities have changed, but the spirit of the Sorority is still very much there,” Markella said. “We were all so excited and proud to found Gamma Tau and, even after 30 years, I still feel the excitement from the Sisters who are still actively involved.”

The Gamma Tau Chapter hosted a celebration for collegiate and alumnae members and their families on Saturday, November 5, to commemorate the milestone anniversary, just one day after the chapter topped the Founders Day of Giving Chapter Challenge leaderboard. The event was organized by Vice President of Organizational Development Kaley Brennan (Gamma Tau 2020/Lebanon Valley), Vice President of Community Relations Briley Cox (Gamma Tau 2021/Lebanon Valley), and other alumnae and collegiate Sisters on the planning committee.

“We wanted this event to be centered around memories that Sisters had, to appreciate the changes and growth the Chapter has made over the years,” Kaley explained.

Approximately 20 alumnae Sisters attended the event, where they had the opportunity to mingle with collegiate members, enter a gift card raffle, and purchase Alpha Sigma Tau shirts and stickers. A few alumnae members also volunteered as speakers during the event, where they spoke about their involvement and memories of the Sorority.

“The takeaway many Sisters and I got was a sense of camaraderie and belonging,” Kaley remarked. “Alpha Sigma Tau is a place for women to grow into who they are meant to be, connect with others, and have a sense of belonging on campus.”

The anniversary celebration was a success because of the connections that collegiate members made with the alumnae who attended the event, as well as the younger alumnae members connecting with founding members and older alumnae.

Sofia Pascuzzo (Gamma Tau 2019/Lebanon Valley) reflected upon the event after attending as a recent alumna. “I enjoyed meeting other alumnae, especially some of the founding members because during my collegiate days, we hadn’t gotten the chance to interact with alumnae as much due to COVID-19. It was awesome to hear their stories and memories,” Sofia said.

As part of her role as the Vice President of Community Relations, Briley interacts with alumnae Sisters on Facebook, as well as through direct messages and texts. She felt the anniversary event strengthened collegiate members’ relationships with alumnae.

“Being able to talk to alumnae in person helped build connections and made me realize that they have our best interest at heart and want the chapter to succeed as it has in the past,” Briley explained. “Growing connections with alumnae will have lasting impacts for our Sisters as we can always ask them for advice or further connections beyond our campus community.”

The Chapter’s 30th anniversary celebrated how far the chapter has come, despite being a smaller chapter. Different generations of Sisters and their families coming together at the event showed how the Sorority has affected so many people. One of the Sorority’s core values – connections – played a significant role at the event.

As the chapter moves forward, Chapter President Karah Snyder (Gamma Tau 2020/Lebanon Valley) shared her hopes for Gamma Tau in the next few years. “I hope in the years to come that the Chapter will grow in many aspects, such as diversity among its members; within our campus, we are continuously working to increase diversity, and this is something I would like our Chapter to continue to do,” Karah said. “It would be beneficial to have people from all different backgrounds to educate others and help establish a better sense of understanding, as well as foster relationships.”

The Gamma Tau Chapter is an example of how the Alpha Sigma Tau sisterhood lasts a lifetime, giving alumnae and collegiate members the network, skills, experiences, and empowerment to excel in life. The Chapter’s 30th anniversary exemplifies how Alpha Sigma Tau Sisters belong to a legacy bigger than themselves.