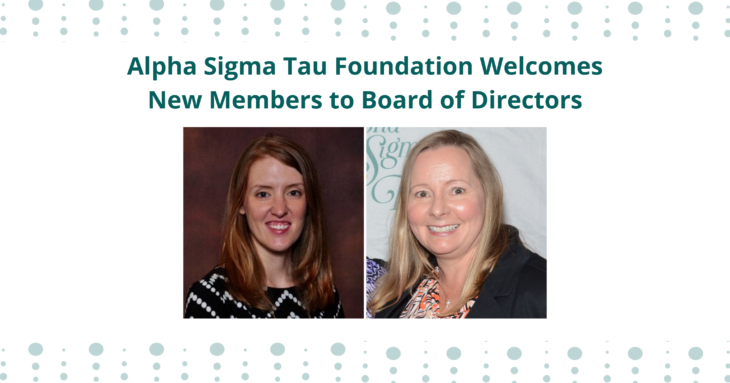 INDIANAPOLIS, IN – The Alpha Sigma Tau Foundation (Foundation) is pleased to announce the appointment of Erika McManus Bukva (Delta Rho 2000/Chowan) and Christina (Chris) Duggan Covington (Alpha Lambda 1986/Radford) to its National Board of Directors. The Foundation is a 501(c)3 non-profit organization that supports the educational and charitable initiatives of Alpha Sigma Tau Sorority.

The Board of Directors oversees the Foundation’s activities and supports its mission, fundraising, and goals. Both Erika and Chris offer expansive portfolios of nonprofit knowledge and experience, including past service as leaders on Alpha Sigma Tau Sorority’s National Council. Erika and Chris also exemplify Alpha Sigma Tau’s Core Values including Connections—building and maintaining meaningful, sincere, and lasting relationships within our Sisterhood and their communities.

“Alpha Sigma Tau changes lives,” said Erika. “The Foundation’s support is crucial for empowering women to excel. I am proud to witness the impact this organization has on members and play a role in the continued growth of the Foundation.”

Erika served as National Vice President of Alpha Sigma Tau Sorority from 2014-2018. She currently resides in Northern Virginia with her family and is a Senior Contract Specialist for Prince William County.

“The Alpha Sigma Tau Foundation provides critical opportunities for women of all ages to explore, grow, and impact the world around them through education support and intellectual development, meaningful membership experiences, and just plain fun,” said Chris. “Empowering women to reach their potential through the Alpha Sigma Tau Foundation is a natural way to pay forward the joy our Sisterhood has given generations of members, and I am excited for the opportunity to serve in this role.”

Chris served as National President of Alpha Sigma Tau Sorority from 2008-2014 and led Alpha Sigma Tau’s update in governance structure in 2010. She currently resides in San Francisco with her family.

“Chris and Erika are long-time advocates and supporters of the Foundation and bring with them a commitment to service and passion for the Alpha Sigma Tau Sisterhood. We are pleased to welcome them to the Board of Directors and look forward to continued organizational growth in the months ahead,” said Alpha Sigma Tau Foundation President Kris Haskin (Beta Pi 1987/Eastern Illinois).