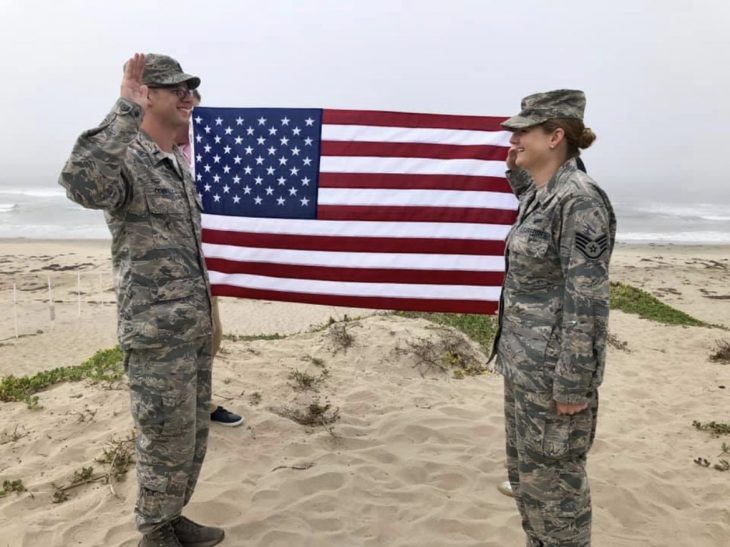 Sergeant Lauren Burgher (Epsilon Kappa 2011/Trine) joined the United States Air Force (USAF) in 2015, shortly after graduating college. “I thought it would be a good way to get onto my own two feet,” she explained. Her Active Duty service meant she received a housing and grocery stipend and healthcare benefits. “I also get educational benefits, so when I joined, I thought it would be a way to pursue a master’s degree,” Lauren added.

She joined USAF as a Space Systems Operator, initially under the Air Force Space Command (AFSPC). In 2019, the United States Space Force (USSF) was established. “It basically meant the old AFSPC is [now] the USSF,” Lauren said.

“After a year, we were asked if we wanted to switch over to the USSF, stay USAF and retrain into a new career field, or [finish] out your contract and separate,” said Lauren. “I chose to switch over to USSF and continue my career.” Lauren is believed to be the first Alpha Sigma Tau member in this brand-new military branch!

She has maintained her title as Space Systems Operator and is currently learning how to be a mentor and guide to other enlisted members. “I am a non-commissioned officer (NCO), and as an NCO, I can supervise junior enlisted members, guide them on their journey with the USSF, and help them start this new career,” said Lauren.

Her leadership skills were first cultivated when she served in various Executive Committee positions as a collegiate member of Alpha Sigma Tau. “When I became President of the chapter, it was my first time being a leader,” said Lauren. “It was an ‘Oh, I’m the person everyone now comes to about everything and anything. People are looking at me for answers.’”

Lauren also credits her time as Chapter President with improving her public speaking skills and her ability to guide group discussions and meetings. She said, “Last year, I had to start running meetings at work, and I used my experience in AΣT to run those meetings, from structure to prepping to staying on topic. I even sent out [meeting minutes] to members who could not make the meeting.”

As a USSF NCO, Lauren wants to be a welcoming “big sister” to Junior Enlisted saying, “I want to be a leader that members feel comfortable approaching with whatever their question or problem is.” Part of this involves incorporating the USSF’s core values –  Character, Connection, Commitment, and Courage – into her everyday life. Living by core values is familiar to Lauren from her Alpha Sigma Tau days.

Currently, Lauren is focused on learning her new unit and job to the best of her abilities. But that doesn’t stop her from dreaming about the next step. “I am keeping my fingers crossed on being promoted to Technical Sergeant during the next promotion cycle,” said Lauren.

Thank you for your service, Sgt. Burgher! If you’re a military service member or family, check out Alpha Sigma Tau’s Stars & Stripes Alumnae Association. Here, you can connect with other Sisters navigating similar challenges and experiences.