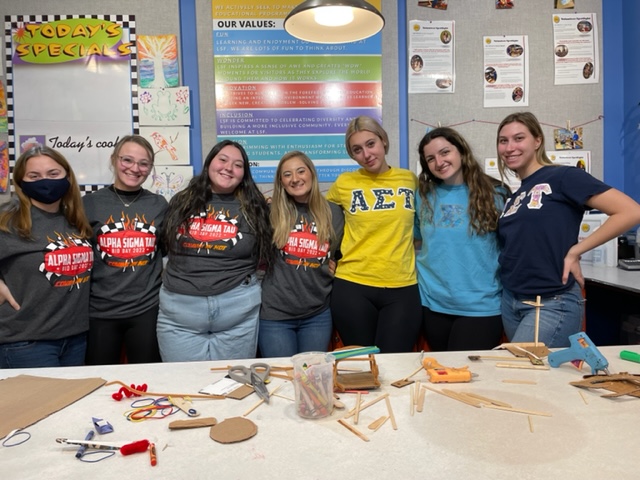 In February 2022, several Beta Iota members from Millersville University of Pennsylvania spent their weekends working with the Lancaster Science Factory, an interactive science center for kids, to promote women in STEM.

The events were organized by Kayla Ketchum (Beta Iota 2021/Millersville), who currently serves as both the Director of Philanthropy and the Vice President of Member Development. She is an Early Childhood Education major with a concentration in STEM, and learned about the Lancaster Science Factory while on a class field trip there.

“They were asking for volunteers for this upcoming event, and another Sister and I who are in the class together decided we would volunteer,” Kayla explained. She worked with the Science Factory’s outreach coordinator to plan two events – a Saturday event that promoted International Day of Women and Girls in Science, and a Sunday event based around curriculum Kayla had developed in her class.

During these two events, approximately 20 Millersville members came to the Science Factory to help and teach the kids in attendance. On Saturday, members helped kids research STEM women and create “trading cards” that featured the women’s accomplishments! They also read to the younger children, using books selected by the Science Factory to promote women in STEM fields.

A few weeks later, on Sunday, Kayla put her own curriculum in place with the help of some of her fellow members who are also education majors. “We wanted to encourage kids to start making things from recycled materials. So, with St. Patrick’s Day coming up, we had kids build a “leprechaun trap” as well as catapults to give the leprechaun back his gold,” she explained. The kids could also take those recycled materials and make simple crafts, depending on their age and skill level.

The parents and kids loved all of the activities. “We got positive feedback from the Science Factory,” Kayla said. “Each day we were there, over 100 visitors came through our events.”

This event was in part inspired by Kayla’s own programming, which she refers to as “Six Months, Six Dimensions.” She said, “Basically, I wanted to combine our philanthropy with bonding events. So each month, we are celebrating a different pillar of wellness, and February’s was Intellectual wellness.”

In January, Kayla planned a Social wellness event, renting a local movie theatre for her Sisters to watch movies and spend quality time together. This event was postponed due to a rise in COVID-19 cases but will happen later in the semester.

“In March, we’ll be doing an Emotional wellness event, called the Anchor Project. We focus on mental health and mindfulness, so you can release what weighs us down,” Kayla explained. “In April, we’ll address Physical wellness by taking a workout class together. Next semester, I’ll plan events for Spiritual and Occupational wellness.”

When it comes to the Intellectual wellness event at the Science Factory, Kayla hopes her Sisters got as much from it as she did. “I was amazed by this one little girl – I could actually see her learning and thinking about a STEM career,” she said. “I hope my non-education major Sisters got to be more comfortable with children, and I hope it gave us all more confidence to try something new. It was good to see growth in members as they talked to parents and kids.”

Thanks to the hard work of our Beta Iota Sisters, kids in the Millersville community now see the STEM world as a possibility!