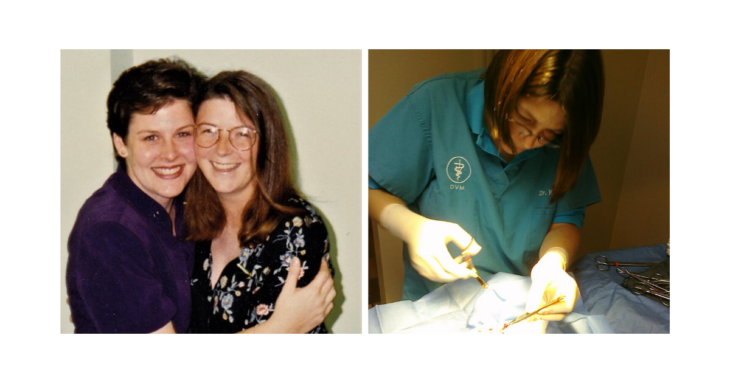 Dr. Kathy Strickland has always had a soft spot for animals. “I did have a squirrel in high school,” she recalled. “I bottle-fed her when she was just growing hair. I tried putting her outside to release her but she always followed me back to the house!” Kathy worried that because her family lived in a busy area, the overly-friendly squirrel would not make it on her own. And so, Kathy ended up keeping the squirrel for six years, letting her chase the dogs around the house and live in unparalleled comfort. It was a learning experience for Kathy, and she took it as an opportunity to improve her skills. “Since then, I’ve tried to be more careful with any wildlife I have rescued, not allowing them to get too used to humans and doing a better job of transitioning them for release.”

Success looks different for everyone, but a common thread is developing confidence in your own abilities. Following your interests can not only bring personal fulfillment but also lead you down some unpredictable paths. Dr. Kathy Strickland (Gamma Gamma 1994/UWA) defines her journey to success in this way. “I wanted to pursue my passion and be able to practice medicine the way I wanted,” Kathy explained. “This meant owning my own business.” Kathy owns and operates Brunswick Pet ER, an emergency pet care facility in Savannah, Georgia, that provides vital services to the community. In addition to this, Kathy is currently serving as the United States Consultant for the Veterinary Defence Association.

As an undergraduate student at what is now called the University of West Alabama, Kathy did not actually begin to study veterinary medicine as one might expect based on her love of animals and her current career. Although interested in the field, her university did not offer all of the necessary pre-veterinary courses, and for a while, she focused on the history classes that she was enjoying. After discussing her dilemma with one of her history professors, he suggested she double major in biology and history to combine her interests and invest herself in research in the field. It was not exactly pre-vet, but Kathy knew she would work hard if she could get on the right track.

Kathy took some time to get to know her coursework and campus before jumping into sorority life. “I initially had a negative view of Greek Life because of the stereotypes,” Kathy admits, “but now I recommend it to my friends with college-age kids. Even if you find during recruitment that it’s not for you, it will still be a learning experience.” Kathy was more confident joining Alpha Sigma Tau when she finally did because she had already met several Sisters during her first three semesters at school. Once she found her home in the Sorority, Kathy felt her world expand as she got to know women from different backgrounds. ”You really can’t be isolated from people unlike yourself in a sorority environment. It’s a chance to find common ground,” Kathy clarified. She regards her time in the Gamma Gamma Chapter as an eye-opening experience. “I was working full-time to pay for my tuition and bills as well as taking a full load of classes, so I learned a lot about creating work-life balance,” Kathy noted. She found that the Sorority offered her opportunities to grow in unexpected ways.

During Kathy’s time as a collegian, the Tau Honor Council did not exist as a mediating system the way it does today. ”We had to resolve disputes as a chapter by working collectively. Sometimes that meant explaining to Sisters that were not following a rule what they were doing and how to correct it,” Kathy stated. She remembers being a bit nervous but recognized the importance of speaking up. “I really valued those discussions as it gave me a chance to voice my opinions and work together with sisters to form a resolution.” Joining a sorority, in addition to tackling her academic responsibilities, helped Kathy to mature and learn about what it takes to be a leader.

Toward the end of her time at UWA, another student in Kathy’s history course who knew about her interest in veterinary medicine recommended a job opening with a nearby vet practice. It was the mid-nineties and this rural facility had only one doctor. “That place really set off my interest,” Kathy reminisced. “It was amazing to learn from this doctor who loved his job and wanted to educate others.” While working at the practice, further guidance toward her career path came from another of her history professors. Her professor knew that she was working with a veterinarian and persuaded her to look into options for vet school and what she could do to make up for the lack of prerequisite classes. “Turned out he was right,” Kathy reported. “After finishing my undergraduate degree, I was able to enroll to get the classes I needed and apply!”

While still in graduate school, Kathy put to use the knowledge she gained in the classroom. “The industry has changed so much since I started that first job,” Kathy confided. “There were not technicians like we have today necessarily. So a lot of the work that I was doing was your basic stuff: dog walking, restraining animals, cleaning kennels, that sort of thing.” Kathy soon learned that these tasks, although entry-level, provided crucial real-world experience and realistic expectations of what the job was really like. Ultimately, she felt better prepared for her chosen career. “My advice to anyone wondering about a career is to get a job in the field and experience it firsthand even if you have to volunteer,” Kathy said.

This insight comes from a commitment to lifelong learning. Starting in 2008, Kathy volunteered for several years as Chapter Advisor for the Epsilon Gamma Chapter of Alpha Sigma Tau at Georgia Southern University Armstrong Campus. She was not sure what to expect at first, but Kathy felt called to serve the Sorority because of the 100-plus years of shared history between the collegians and herself.  “I wanted to make sure the current collegians understood our values so that they had the same experience that I did,” Kathy remarked. She eventually found that even though she was there to pass on her wisdom, she also picked up a few new things from the collegiate chapter. “They really showed me how the communication aspect has changed, especially with technology. As you get older you will say the same things about younger generations,” Kathy laughed. Her leadership was modeled after the mentors who had recognized Kathy’s potential and hard work back in graduate school, recommending she complete clinical hours at an alumni-affiliated emergency practice over Memorial Day weekend. This “real world” opportunity was what helped Kathy find her desired place in the sector of emergency medicine. She would then go on to graduate from Mississippi State University in 2004 as a Doctor of Veterinary Medicine. “Sometimes success comes down to the right time and right place,” Kathy hypothesized. “I knew I needed to be fulfilled and challenged in my work.”

Kathy (right) and her new member Sister smile during their last Founders Day as collegians.

Kathy (left) and her Big Sister Holly McNider return to UWA for Homecoming in 2017.

Kathy recognizes the positive contributions that being an Alpha Sigma Tau Sister made toward her collegiate experience as well as her career, and she uses some of the same negotiation and organizational skills she learned as a collegiate member in her current role with the Veterinary Defence Association. The VDA is an international, nonprofit organization that advocates for integrity in the veterinary profession. It does this by providing conflict resolution, education, and legal counsel for disputes between veterinary professionals and animal owners. Many years ago, when she entered a dispute with a pet owner at Brunswick Pet ER, Kathy needed to track down an alternative solution. She came across the VDA online and reached out to the founder for insight on her situation. It turned out that joining the organization’s staff was just the thing she needed. Kathy finds purpose in being an advocate for other professionals such as herself and helping pet owners to understand the outcomes of their cases. Kathy compared her important work to the process of encouraging Epsilon Gamma Sisters to communicate better through the Tau Honor Council, using invaluable mediation skills she learned as a collegian herself. “In my work with the VDA, I need to objectively evaluate facts, discern them from emotions and hearsay, discuss and explain the issues with each party, and come up with a solution that is fair to all,” Kathy explained.

“Most of the stuff I’ve done has been unconventional,” Kathy reflected. Even though she could not start out in pre-vet classes, she pivoted toward veterinary medicine somewhat quickly after that first job, chasing her interest with determination. She listened to her instincts and joined Alpha Sigma Tau during her second year at school, gaining unexpected yet critical career and interpersonal skills. She accepted a position with the Veterinary Defence Association to better the lives and work of veterinarians and their customers. Thinking over her accomplishments, Kathy had this to say about her goal-oriented mindset: “If it sounds like something I’d like to do, I go towards it.” Kathy always maintained her early love of animals, and it helped her find a way to create her own version of success. She continues to seek fulfillment by trusting her gut and using the tools gained through her connection with Alpha Sigma Tau. Her path may have been unconventional, but Dr. Kathy Strickland has everything she needs to prosper as the business owner and advocate that she is today—thanks in part to Alpha Sigma Tau.