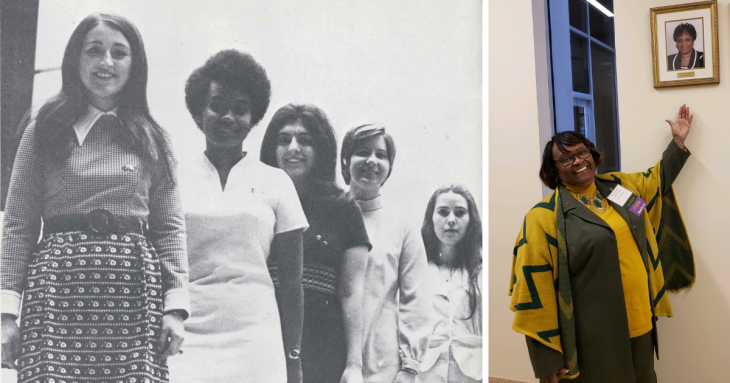 Dr. Constance Smith Hendricks (Beta Zeta 1972/UAB) has dedicated her life to nursing, teaching, and learning – and along the way, has gathered quite a few accolades and quite a few firsts.

Her CV now spans 29 pages, but she started her illustrious career as a nursing student at the University of Alabama at Birmingham (UAB) in 1971. “I always knew I wanted to be a nurse, ever since I was a kid,” Dr. Hendricks said.

“I really came to college as an open slate,” she reminisced. “I saw this announcement for a ‘rush party’ and I thought I would go.” Dr. Hendricks remembers being one of just two African-American women to attend UAB’s recruitment. “The other young lady, I didn’t know her – she was an older student – but the two of us accepted the invitation,” she said.

In Spring 1972, she was initiated into Alpha Sigma Tau’s Beta Zeta chapter, where she served as Chapter Treasurer and Chapter President. “Alpha Sigma Tau taught me enough about leadership and Sisterhood to last a lifetime,” she said. The colors for her wedding were even green and gold, which represented both UAB and AΣT!

After graduating, Dr. Hendricks became a staff nurse at the university hospital, but shortly after was invited to return to UAB as a nursing clinical instructor. During this experience, she decided to continue her education by pursuing her master’s degree.

Her reason? Dr. Hendricks realized she wouldn’t be able to be a full-time faculty member at a college without one. “My masters opened a lot of opportunities – being a nurse practitioner, being a faculty member,” she explained.

Her Masters in Community Health opened the door for her first appointment at Tuskegee University, where she was an assistant professor for two years in the 1980s. She would later become a professor in the Department of Nursing in 2010 and the Dean of Nursing in 2018.

Eventually, Dr. Hendricks also realized that “you couldn’t do research without a doctorate.” In deciding to pursue her education and advance her career, Hendricks became the first Black faculty member in Auburn University’s School of Nursing in 1987 and the first Black individual to graduate from Boston College’s Ph.D. program in 1992.

“I attended a program while I was at Boston College, where a man came to present about diversity and used Auburn as his example. One of his slides showed just one Black faculty member in the School of Nursing. After his presentation was over, I went to him and said, ‘I think I’m in your presentation,’ and he asked where, and I said, ‘That one person in Nursing,'” Dr. Hendricks laughed.

However, Dr. Hendricks’ proudest moment is not one of her many degrees, appointments, or firsts, but a program she instituted at Concordia College Alabama after she retired in 2015 from her Professor Emeritus position at Auburn University.

As both the Health Sciences Division Chair and the Department of Nursing Director, Dr. Hendricks developed a BSN program that allowed students (who already had their associate degrees in nursing) to get their bachelor’s of nursing in just 12 months, while only attending one day of school a week.

In a 2017 interview with The Selma Times-Journal, Dr. Hendricks described the program as turning good nurses into “great nurses” by adding “leadership skills, research, and what is now called evidence-based practice” to their curriculum.

In creating this program, she removed quite a few of the barriers that prevent people from pursuing higher learning or advancing their careers. “These students couldn’t leave their homes for long periods of time to go to school; they worked or took care of their families,” she explained. “It was a long day, but it was just one day.”

Although the college closed in 2018, Dr. Hendricks still keeps up with the two cohorts of students she guided through the program. Several of her graduates now have doctorates or attend graduate programs, while others work in local hospitals. “It’s just so wonderful to watch,” Hendricks said.

As someone who has advised countless students throughout her career, Dr. Hendricks has some words of wisdom to pass along. “Have some passion and put in the work,” she said. “You also need to put your ego in your back pocket and get some help when you need it. Do your best and be thankful for that best.”

Alpha Sigma Tau is proud to celebrate Dr. Constance Smith Hendricks’ life and work, as she truly upholds our values every day!