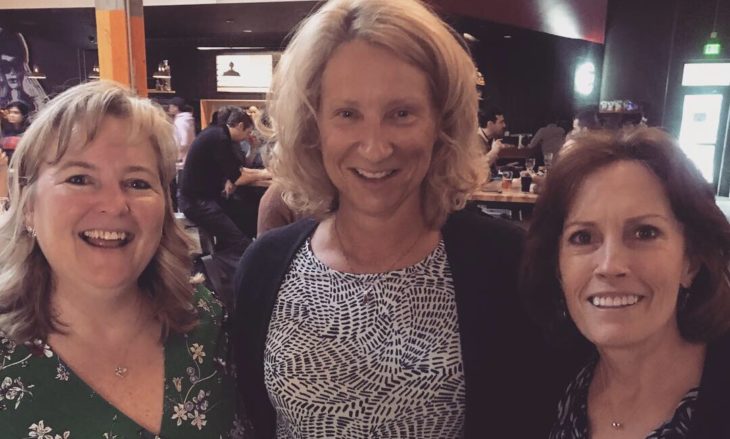 She may be living aloha five thousand miles away in Hawaii, but the bonds that link Pam Emory-Siedling, Beta Mu, to her Sisters in Maryland are as strong as ever. By happy coincidence, Pam was able to attend not one but two Night to Reunite events in the greater Baltimore area, reconnecting with both newer friends and old, including several she hadn’t seen in decades.

“I had been wanting to make a trip back to the east coast, and it just so happened that I landed on early April,” Pam says. “It was just a few weeks before I was flying back and I saw the posts starting to come up on Facebook about Night to Reunite. I looked at my dates, and said, ‘Oh my gosh, I am actually going to be in Maryland on this date!’” Despite having a full schedule and a long list of family and friends to visit with while in town, Pam knew that connecting with Sisters would be a priority. “I was super excited, and it really was just a complete coincidence, but I thought, I need to make this work. I’m going to set aside Thursday evening to spend time with my Sorority Sisters.”

Pam had twice been a founding member of the Baltimore Alumnae Chapter: first as part of the initial establishment in the 1990s and again in 2011 when the chapter reorganized. Naturally, she reached out to the alumnae chapter first, and let them know she would attend their gathering. However, she soon discovered that her chapter Sister Adele Black was also planning an event for her and her fellow Beta Mu alumnae the same evening. “I thought, I can do this. I can stop and see my Baltimore Alumnae Sisters and then head down and spend time with my college Sorority Sisters!”

“Pam was an extremely active member of the Baltimore chapter, and we were sad when she moved,” Erica Richards, Baltimore Alumnae Chapter President and Beta Mu alumna, remarks.  “The absolute highlight of our event was Pam being in town from Hawaii. I was ecstatic when I saw her walk through the doors!” Erica is a strong supporter of the Night to Reunite experience and shares that love enthusiastically. “I love Night to Reunite because it gives women the opportunity to come out to an event to literally do that: reunite, make connections, meet people you have never met! This night is so special because [these connections are] happening across our country at the same time on the same day,” she says. “Alumnae events are always happening, but the fact that this is happening simultaneously is really a cool thing. The ability to follow along on social media makes it an even better experience!” However, no one could have known that the Baltimore event was about to become even more special.

Pam recalls, “I had been there maybe 45 minutes to an hour, and two of my Sisters whom I went to college with, Shelley and Denise, walked in! I don’t think they had RSVP’d, and they just showed up. There was no way to realize we were celebrating our Sorority – none of us were in letters, there were no green and yellow balloons. And one of them looked over, and recognized me, and came over. I knew immediately who they were, and I hadn’t seen them in probably twenty-five or thirty years.” Had Pam not been in attendance, Shelley and Denise may never have approached the group, and the opportunity would have been a missed connection for everyone.

“It was the universe. I happened to be sitting the right way, and they happened to be scanning the room, and it was so great. What was rough was breaking away from them to attend the Beta Mu alumnae gathering,” Pam laughs. Break away she did, however, and though sorry to leave so soon after having reconnected, Pam was excited to catch up with chapter Sisters at the next event.

Adele is a repeat Night to Reunite organizer, having planned events for her fellow Beta Mu alumnae for several years. “I’m grateful to the national organization for creating such a great event,” she says. “Having this national initiative just kind of opened the door for me to put feelers out there for interest.” This year, Adele’s event was hosted in a member’s home rather than a restaurant. Wanda Pettit served a main course, and attendees all brought side dishes for a comfortable, relaxed evening with Sisters who are still more than friends.

“It seems easier to get others from my generation involved if they get to catch up with sisters that they were initiated with and were in college with,” Adele notes. “It’s just like old times.”

The evening’s surprises followed Pam from one event to the next, as her dual attendance made reconnecting possible for even more of her Sisters. “If Pam hadn’t attended both [events], Polly and I would not have known that our Big Sisters that we’ve been searching for showed up at the Baltimore event,” Adele retells. “Sisterhood is truly amazing, and I’m so excited to one day soon meet up with my Big.”

Beta Mu’s alumnae took the chance to collectively encourage their collegiate Sisters to remain involved after graduation. “Another highlight of the evening is when I requested that all Sisters sign a card and send wishes to the Beta Mu Chapter to show that Sisterhood and friendships are for a lifetime and not just your college years,” Adele says. She told her Sisters that she would “be donating a Ritual item in their honor for attending Night to Reunite. I am still moved by my Sisters on that evening; they contributed, and we were able to donate 10 Ritual items to the chapter! They forever touched my heart.”

So why do these women choose to maintain such strong connections to Alpha Sigma Tau as alumnae?

“It grounds me and keeps me connected to the purpose and ideals of Alpha Sigma Tau,” Adele responds. “To one extent or another, I’ve remained involved since I [joined] in 1984, and I just don’t know how else to be. And then I have all those amazing times with my Sisters, and I can’t leave AΣT behind or on the sidelines.”

Erica is in agreement with Adele’s thoughts. “When I was initiated into Alpha Sigma Tau, I committed to a lifetime membership, and I intend to fulfill that commitment. I think that gets forgotten after we graduate,” she says. “Alpha Sigma Tau has taught me so much and made me grow as a person and a woman. [My experience] has given me time management skills, confidence, leadership skills and so much more, and it can do that for all of its members during college and after graduation. You can gain so much from Alpha Sigma Tau after your college years; think about it —you’re an alumna member for way longer than you are a collegiate member!